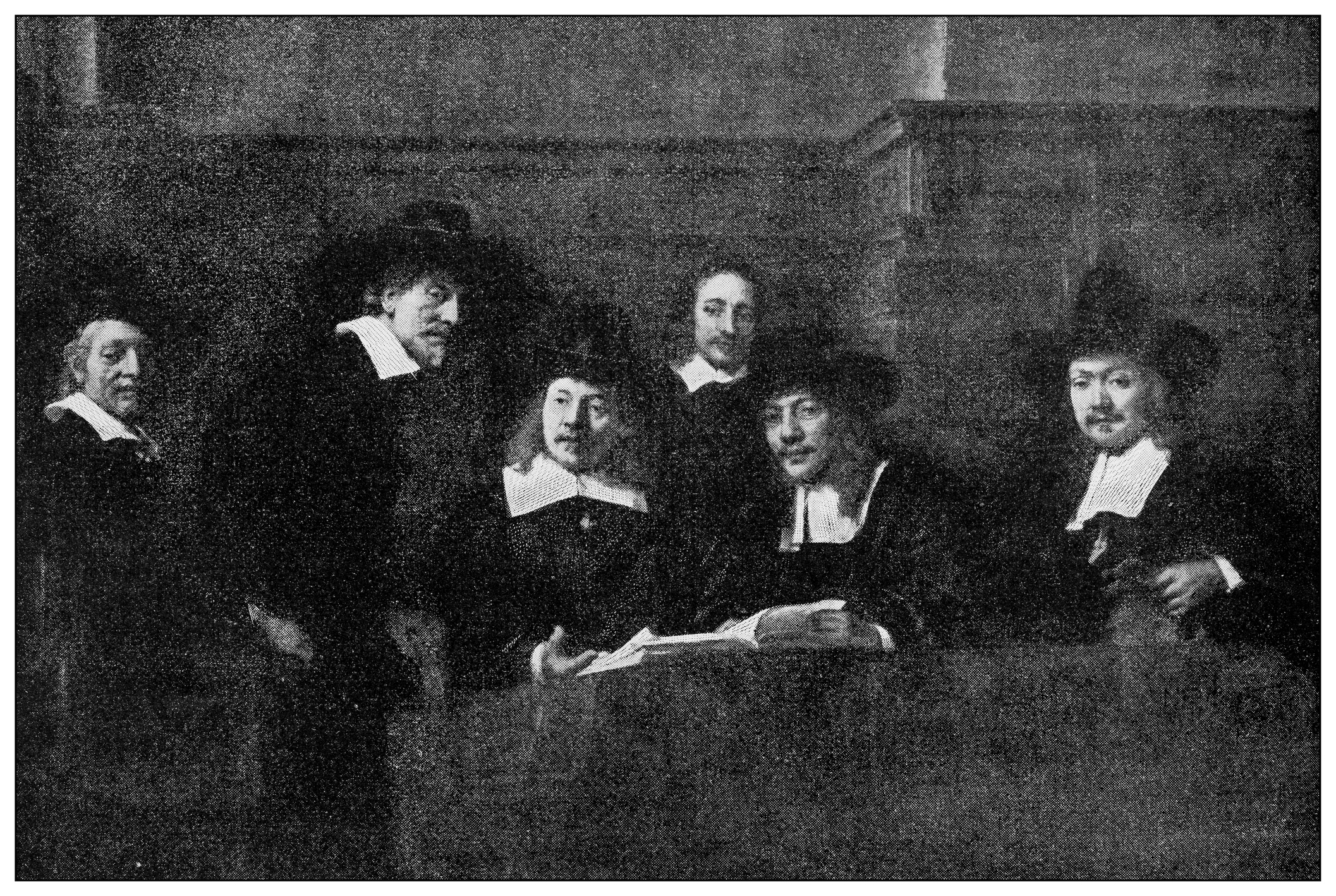 Believe it or not, though, there was a time when Dutch Masters Cigars were not nearly so ubiquitous. After all, even the biggest and most beloved companies had to start somewhere. We already shared the story of another popular brand, Backwoods Cigars. Today, we will relate the history of Dutch Masters Cigars and how they became so universal.

You read that correctly: our story begins in the 17th century, with no less a notable historical figure than Rembrandt. By this point, wealthy Dutch patrons were no longer knocking on the aging artist’s door. Even so, the Amsterdam Drapers’ Guild did commission one of his last great works: “The Sampling Officials,” also called “Syndics of the Drapers’ Guild.”

This painting depicts the five guild members and their attendant in the middle of an inspection. Their job is to scrutinize weavers’ products before deciding if they are worthy of use by guild members. As such, they needed an eye for quality that can sort the great from the almost-great. One interpretation holds that the piece spotlights the value of a critic’s perspective to art in any medium.

Little has been recorded about the GH Johnson Cigar Co. All that most people really know about this company is that it created the Dutch Masters brand back in 1912. They made these cigars with machines, which only boomed as an industry practice a decade later. The wrap is all-natural, with no filter whatsoever — a wise move, given what scientists would later discover about the extremely carcinogenic nature of filters.

When deciding on a name, the company’s marketing team turned to the artistic luminaries of the Netherlands’ Golden Age. “The Dutch Masters,” as some call them, consist of 17th-century painters like Hieronymus Bosch, Johannes Vermeer, and Rembrandt. Likewise, they appropriated the latter’s “The Sampling Officials” for the cigars’ packaging as a tribute. Its depiction of quality assurance officials seemed fitting for advertising their high-quality products.

How would you respond if we asked you, “Where are Dutch Masters made?” Your answer would likely be both completely understandable and completely incorrect: the factories are located in Puerto Rico. They do not even use Dutch tobacco. Instead, they use Caribbean Basin Cuban seed. Why they chose the Dutch theming seems like a secret for tobacco historians to dig up.

In 1918, GH Johnson merged with five other producers to form Consolidated Cigar Corp. Their main brand became the new corporation’s main brand. Despite this, Dutch Masters spent the next few decades only gradually accruing popularity. If they wanted greater market share, they would need more than Rembrandt packaging.

Enter Ernie Kovacs. After his death, comedians ranging from Monty Python members to Jim Henson to virtually every major late-night host cited him as an influence. In the 1950s, though, the TV comedy innovator still took every gig he could get and could only hope for creative control. Following a successful special, Dutch Masters took a chance on Kovacs and gave him free rein on their dime.

The results were multiple specials and a litany of commercials whose comedy still hold up long after tobacco advertising was banned on television. They typically featured Kovacs’s trademark silent comedy, clever cinematography, and a soothing Joseph Haydn string piece that clashes with the onscreen chaos. A memorable spot with a smoking string quartet won two awards at the first Clios ceremony, the advertising equivalent of the Oscars.

Whether he smoked rings underwater or rampaged at cowboys who blasted his cigar butt, Dutch Masters could count on Kovacs to be clever and funny. The commercials from these four years gave the brand a place in the TV comedy history books. More immediately, they put the brand on the radar of many Americans, who elevated them to the level of other popular smokes. As with their packaging, Dutch Masters found success by embracing the arts.

Unfortunately for Dutch Masters, the relationship did not last. Kovacs perished in a car accident in 1962. Despite attempts at follow-up campaigns, increased restrictions on advertising tobacco products stifled their efforts. How Dutch Masters made their cigars had not changed. It was simply that their excellent quality could only do so much to help spread the word.

There was also, of course, the increased public awareness of links between tobacco smoking and cancer. This change, along with the TV advertising ban, affected all tobacco products manufacturers. Just after a period of consistent growth, Dutch Masters sales stagnated, then slumped with the rest of the industry.

In 1999, the corporation became a subsidiary of SEITA, formerly France’s state-run tobacco monopoly and now a private business. Not long after, it merged with Tabacalera — the Spanish equivalent of SEITA — to form Altadis, the fifth-largest tobacco company in the world. In 2008, the British multinational conglomerate Imperial Brands purchased Altadis. These changes in ownership matter little for most folks. What matters is that the Dutch Masters brand was always a major selling point.

Dutch Masters Cigars remain top-sellers to this day for a reason. They truly are some of the most masterfully made and satisfying cigars on the market. If you have never tried one before, you can take a chance on them for cheap here at Cheap Cigars 4 Me. If you are already a fan, you can find your favorite flavor from our selection of 60-plus premium products.

By the way Dutch Masters have improved Cigar snobs who only smoke $10 Macundo Stix should give these a try all tobacco no binder like backwoods. Small but a bargain at $1.29. For 2. An they are from Dom Rep an taste great an have slow burn!